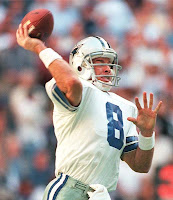 How fitting for Troy to land at number 8 on my list. The golden boy starred for UCLA before being the number 1 overall pick of the Dallas Cowboys in 1989. After posting a 0-11 record in his rookie season, Aikman won 90 games and 3 Super Bowls in the decade of the 1990s.

Aikman’s 3 titles, which includes a game MVP, set him in exclusive company. Only 2 quarterbacks have won more. Surprisingly, Troy has very average stats, throwing just 165 touchdown passes compared to 141 interceptions. All in all, Troy was a winner whose leadership cannot be told by sheer numbers. Unless those numbers are 3, the number of titles he brought to Dallas. 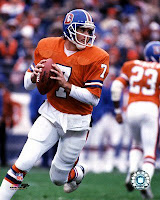 No one did so much with so little as John Elway. This guy carried 3 different Denver Bronco teams to the Super Bowl when they had no business being there. A true clutch performer, Elway has 46 game winning drives on his resume. He guided the Denver Broncos to 148 wins with his 50,000 passing yards during his 16-year career.

Elway’s rifle arm led him to 399 career touchdown passes. On the other hand, that arm also produced 226 interceptions and a very mediocre 56.9% completion percentage. But I don’t remember him for his miscues. I remember him closing out his career with back-to-back Super Bowl wins. Talk about going out in style. 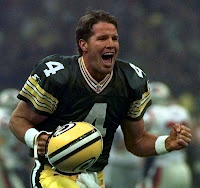 I’m not one of those guys who has a man crush on Favre. What no one can deny is that for 20 seasons no one played with the combination of toughness, exuberance, and joy quite like Favre did. He literally rewrote the record books and was as revered across the NFL as any other player in league history.

Favre retired with the most passing yards, completions, and touchdowns in league history. He also retired with the most interceptions (336) and, for all his success, just a 7-11 record in the postseason. His multiple retiring and un-retiring routines are well documented, but the guy deserves his props for winning 3 MVPs and playing sport’s toughest position for 298 straight games. That’s gangsta.
Posted by NJ Sports Addict at 10:51 AM