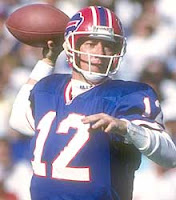 11. Jim Kelly        FTQBR - 24
For 11 years Jim Kelly ran the K-Gun offense to perfection for the Buffalo Bills. The Hall of Fame quarterback led the Bills to 8 playoff appearances including 4 straight trips to the Super Bowl.

Kelly threw an impressive 237 touchdowns passes in his career, including his league leading 33 in 1991 when he was named to his only All Pro team. He would have had to win a couple of those Super Bowls to break into the top 10. 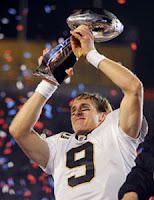 10. Drew Brees        FTQBR - 33
Drafted by San Diego, Brees developed into a Pro Bowl quarterback before the Chargers let him walk due to injury. He signed with the Saints and brought a Super Bowl to the Katrina ravaged city of New Orleans.

Brees put up big career numbers across the board with a 91.2 rating, 239 touchdown passes and a 65% completion percentage. Add a first team All Pro selection and a Super Bowl MVP award with those numbers and Brees is well on his way to a bust Canton. 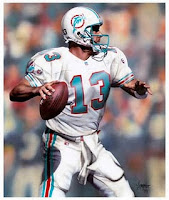 9. Dan Marino        FTQBR - 39
Now we are firmly into the upper echelon and who better to start with than Dan Marino. He set the world on fire in 1984 when he was league MVP, setting single records for touchdowns (48) and passing yards (5,084). With his quick release, Marino retired holding every major career passing record. His play earned him a first ballot Hall of Fame selection.

Unfortunately, Marino was never able to have the same success in the postseason. He had just a 5-10 playoff record after winning 147 games in the regular season. The biggest blemish on his resume` is his lack of a Super Bowl title, but still Dan Marino was truly an all time great and deserves this top 10 spot on my list.
Posted by NJ Sports Addict at 12:01 AM