Awards given to players through the first third of the season. 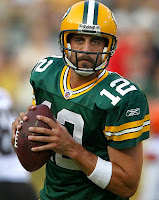 Best Defensive Player
Jared Allen (DE, MIN)
Allen has been dominating and flat-out unblockable thus far. He is not only sacking QBs, he is playing a little pass defense as well. Through the first third of the season, Allen leads the NFL with 8.5 sacks and has 4 passes defended, 1 interception, a forced fumble and a fumble recovery. He’s been the best on the defensive side of the ball so far.
In the running
George Wilson (SS, BUF) – Wilson is third in the league in total tackles (47) and has a league leading 3 interceptions for the Bills.
Morgan Burnett (SS, GB) – The Packer’s strong safety is tied for the league lead in interceptions (3) and has tallied 8 passes defended, a sack, a forced fumble and a fumble recovery.
Carlos Rogers (CB, SF) – Rogers is tied for the league’s lead in both interceptions (3) and passes defended (10). He also has an interception returned for a touchdown.
Jason Pierre-Paul (DE, NYG) – JPP is leading one of the league’s best defensive lines with 7.0 sacks (2nd in the league), 27 tackles, and a forced fumble.
Best Offensive Rookie
Andy Dalton (QB, CIN)
I know, I know, you were probably expecting Cam Newton. While Dalton hasn’t thrown for the yards that Newton has, he has just one less touchdown pass and one less interception thrown than the Carolina QB. Dalton leads rookie passers in completion percentage (59.2%) and wins (3). He has a team with fewer weapons than almost any other in second place in the AFC North.
In the running
Cam Newton (QB, CAR) – The 2011 number 1 pick leads all rookie passers with 1,610 yards, 7 touchdown passes and a rating of 84.3.
A.J. Green (WR, CIN) – The Bengals wideout leads all rookie receivers in yards (402) and touchdowns (3)
Julio Jones (WR, ATL) – Jones leads all rookies with 25 catches and is second with 358 yards.
Best Defensive Rookie
Von Miller (OLB, DEN)
Von Miller has completely lived up to his hype so far. The second overall pick in the 2011 draft has been a bright spot in the Broncos’ dark start. He leads all rookies with 5.0 sacks and 2 forced fumbles. The sky is the limit for this guy.

In the running
Aldon Smith (OLB/DE, SF) – The 49ers rookie is second among rookies with 3.5 sacks.
Patrick Peterson (CB, AZ) – The rookie has tallied one interception to go along with a punt returned for a touchdown.
Comeback Player

Matthew Stafford (QB, DET)
This was a close one between Stafford and Alex Smith. Ultimately, superior numbers and one more gives Stafford the nod.  Stafford has finally given the Lions’ fans something to roar about. After a terrible injury cut his season to just 3 games in 2010, Stafford has rebounded to be an MVP candidate. He has thrown for 1,436 yard, 14 touchdowns, and has a QB rating of 101.4. More importantly, he has his Lions 5-0 for the first time in 50 years.

In the running
Alex Smith (QB, SF) – Jim Harbaugh has the former number 1 overall pick finally playing winning football after years of futility. Smith ranks sixth in NFL in completion percentage (65.9%) and fourth in passer rating (104.1).
Steve Smith (WR, CAR) – Smith has rebounded from injuries, inconsistency, and spotty QB play and has returned to Pro Bowl form. Smith leads the league in yards per catch (22.6) and is second in receiving yards (609).
Jason Pierre-Paul (DE, NYG) – JPP has finally started to play up to his first round selection. He has 7.0 sacks and force fumble through 5 games, besting his entire 2010 season output.
Posted by NJ Sports Addict at 1:04 PM